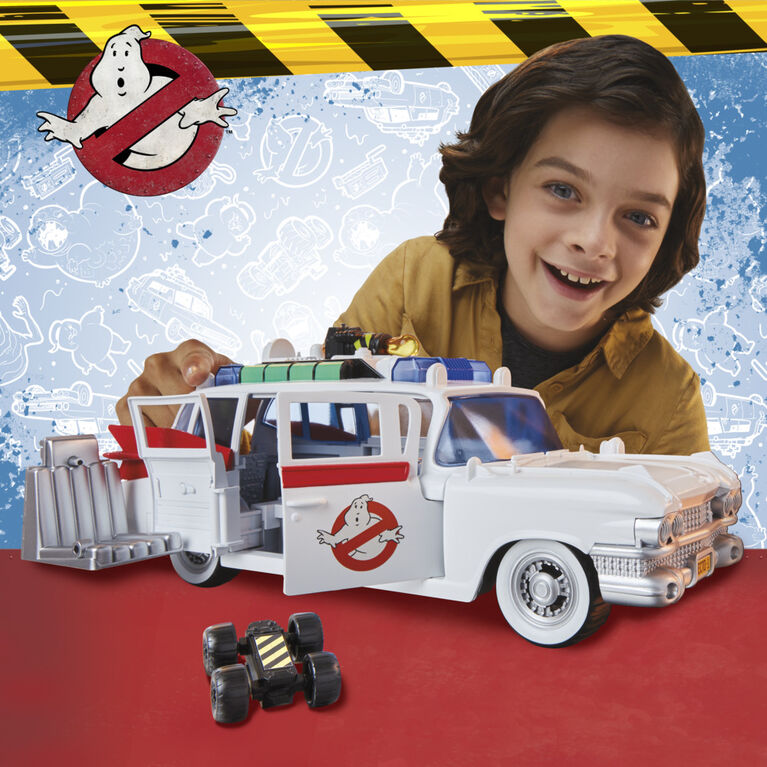 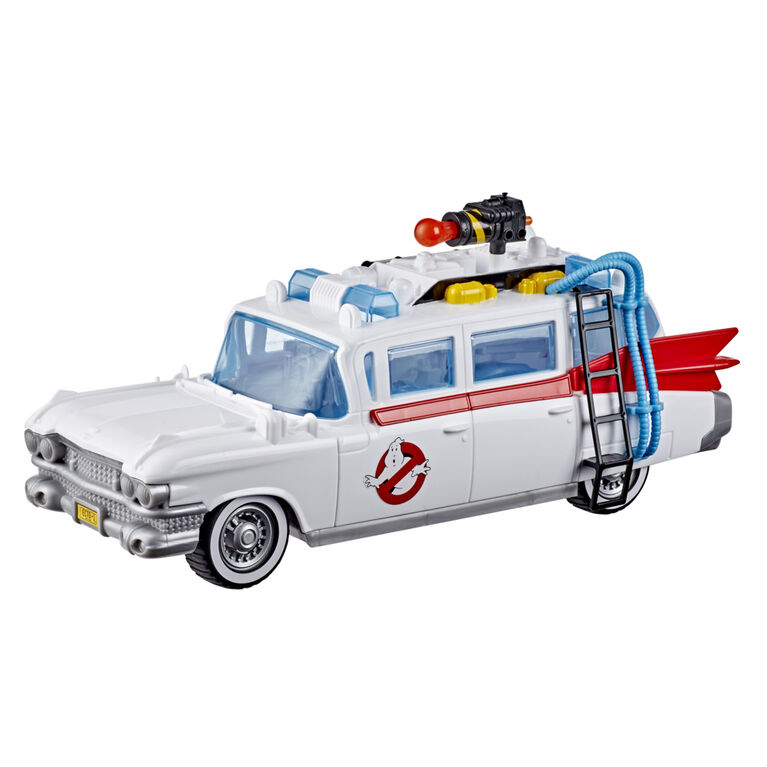 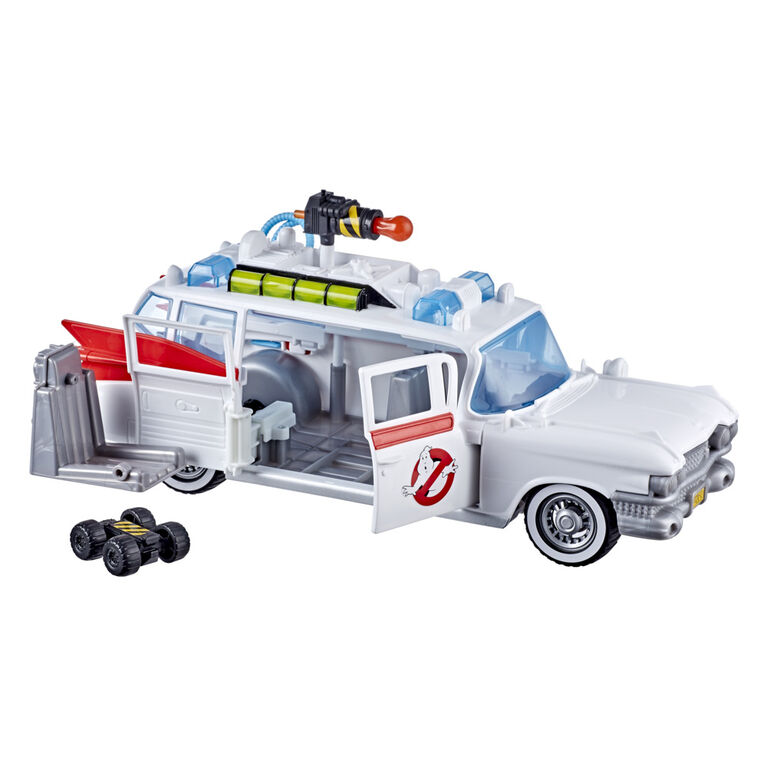 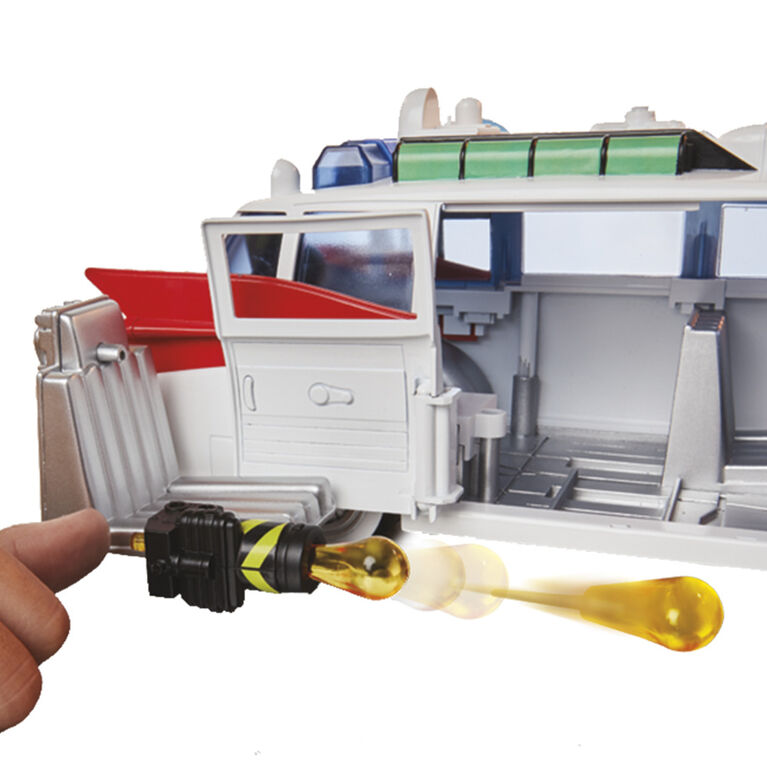 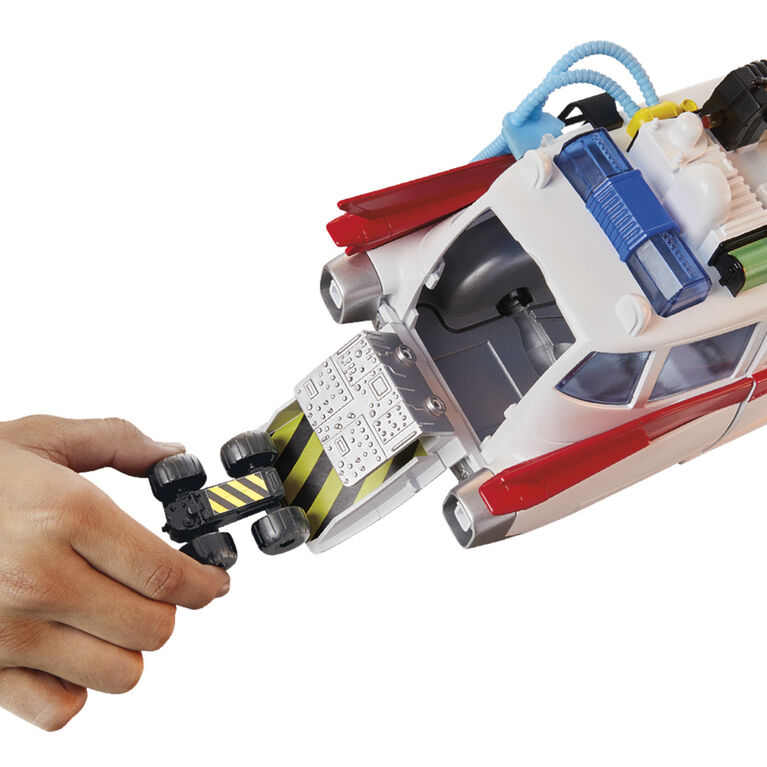 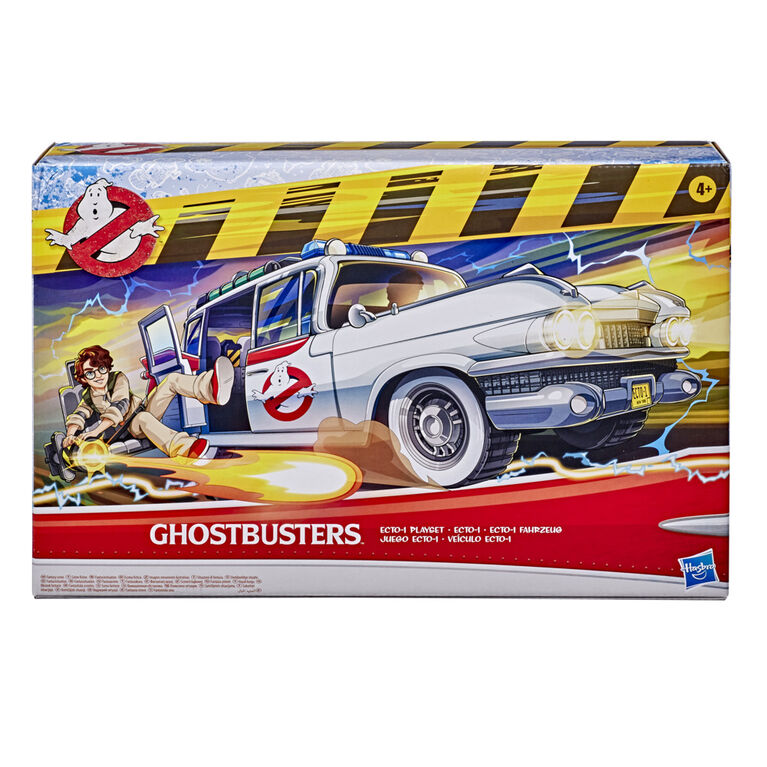 Ghostbusters 2020 Movie Ecto-1 Playset with Accessories is rated 3.5 out of 5 by 2.
<!--begin-bvseo-reviews--> <!--begin-reviews--> <div id="bvseo-reviewsSection"> <div class="bvseo-review" itemprop="review" itemscope itemtype="http://schema.org/Review" data-reviewid="187499614"> <span itemprop="reviewRating" itemscope itemtype="http://schema.org/Rating"> Rated <span itemprop="ratingValue">2</span> out of <span itemprop="bestRating">5</span> </span> by <span itemprop="author" itemtype="http://schema.org/Person" itemscope><span itemprop="name">Anonymous</span></span> from <span itemprop="name">Not impressed</span> <span itemprop="description">First! First and foremost, I am not a big fan of this product. Assembling it was easy, but the stickers were tough. The instructions have you put it together then put the stickers on. It's way easier to put the stickers on first, as the rear-hatch door has a pocket for the wheeled trap that blocks the placement of the sticker. The rear white wall tires are two white stickers, and have to be put on in half's, which is hard enough. With the ladder in the way it is even harder. It is easier putting the white stickers on the tires first before assembly. The green stickers on top are also hard and I could not get it on perfectly, leaving a bubble. There's a youtube video from GeekDad that can explain this better, but his review is positive (he gets this toys for free to review it). Assembly is easy, but the stickers are complicated. It's body and doors are a soft plastic, which in some ways is good because it's flexible. However, it's soft plastic because of how the doors are constantly being pushed in and out and having to be pushed in. Furthermore, you have to pull the gunner door out after it is open to use it, which I can see breaking. Often the doors have to be pressed in to line up with the body. The gunner seat takes up like what should be three seats, meaning the car has a driver seat, a seat beside it that is facing backwards (the gunner seat) and that's it. It's a two seat vehicle. There is no real steering wheel. It looks like one but it is just apart of the plastic dash, that doesn't come out or turn. It should also be bigger as well. The original Kenner Ecto-1 is far from perfect, but at least the driver-side door opened and the doors closed flush with the body (without that extra push in). The plastic was harder and it fit three figures in seats, not two. This new Ecto-1 does have a orange missile that shoots out if pushed from the back and comes with a ghost trap on wheels, but no figure or ghost. For me the gunner seat is nothing special because it's not spring-loaded and it takes up a lot of space. Only if the car was longer, with another row of seats, would it work. The gunner-door also has to be pulled out after opened, so again, it pops off the door connectors easily. The gunner seat doesn't work without the front passenger door opening first and then you have to close it (all manually). I'm a nerd, so I bought this, but I could see this as undesirable ahead of time. Basically, it's cheap. I knew it would be, but I got it anyways because it gives my kid something to play with other than my 2021 Ecto-1 re-release from the 80s. However, some features likes lights or sounds would have been good (if it had it). Also, a gunner seat that opened at a push of a button would have been smart. A driver door that opened would have been wise. It should have at least been longer to fit at least a real front passenger seat. Done.</span> <div class="bvseo-pubdate">Date published: 2021-09-18</div> <meta itemprop="datePublished" content="2021-09-18" /> </div> </div> <script type="text/javascript"> if (document.getElementById('bvseo-reviewsSection')) { document.getElementById('bvseo-reviewsSection').style.display = 'none'; } </script> <!--end-reviews--> <ul id="BVSEO_meta" style="display:none!important"> <li data-bvseo="bvDateModified">y_2022, m_12, d_5, h_21</li> <li data-bvseo="ps">bvseo_bulk, prod_bvrr, vn_bulk_3.0.34</li> <li data-bvseo="cp">cp_1, bvpage1</li> <li data-bvseo="co">co_hasreviews, tv_1, tr_1</li> <li data-bvseo="cf">loc_en_CA, sid_D4480B40, prod, sort_[SortEntry(order=SUBMISSION_TIME, direction=DESCENDING)]</li> <li data-bvseo="diagnostics">clientName_toysrus-ca</li> </ul> <!--end-bvseo-reviews--> <ul id="BVSEOSDK_meta" style="display: none !important;"> <li data-bvseo="sdk">bvseo_sdk, dw_cartridge, 18.2.0, p_sdk_3.2.0</li> <li data-bvseo="sp_mt">CLOUD, getReviews, 4ms</li> <li data-bvseo="ct_st">reviews, product</li> </ul>
<ul id="BVSEOSDK_meta" style="display: none !important;"> <li data-bvseo="sdk">bvseo_sdk, dw_cartridge, 18.2.0, p_sdk_3.2.0</li> <li data-bvseo="sp_mt">CLOUD, getContent, 18ms</li> <li data-bvseo="ct_st">questions, product</li> <li data-bvseo="ms">bvseo-msg: Unsuccessful GET. status = 'ERROR', msg = 'Not Found.';</li> </ul>
Ghostbusters