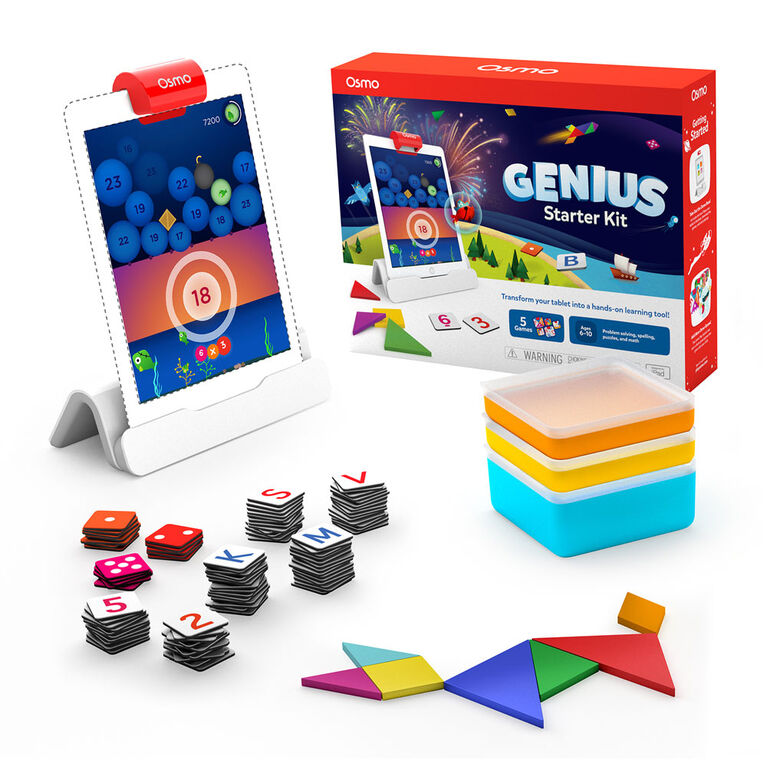 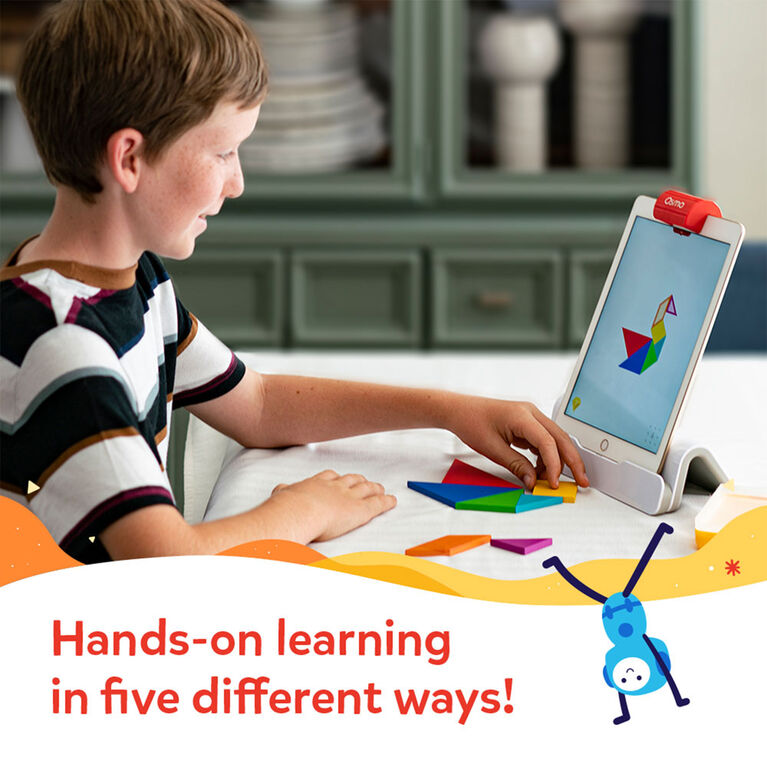 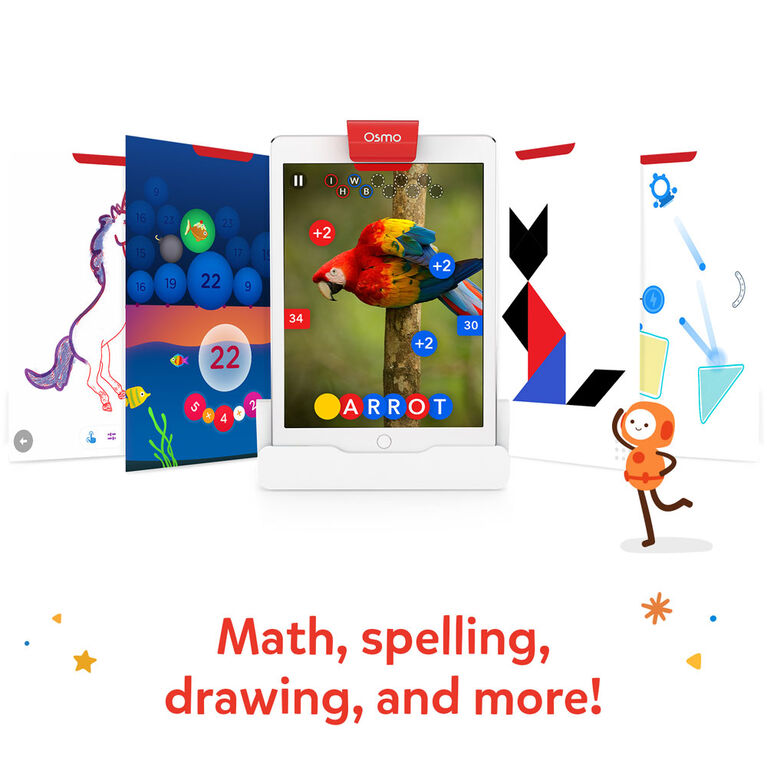 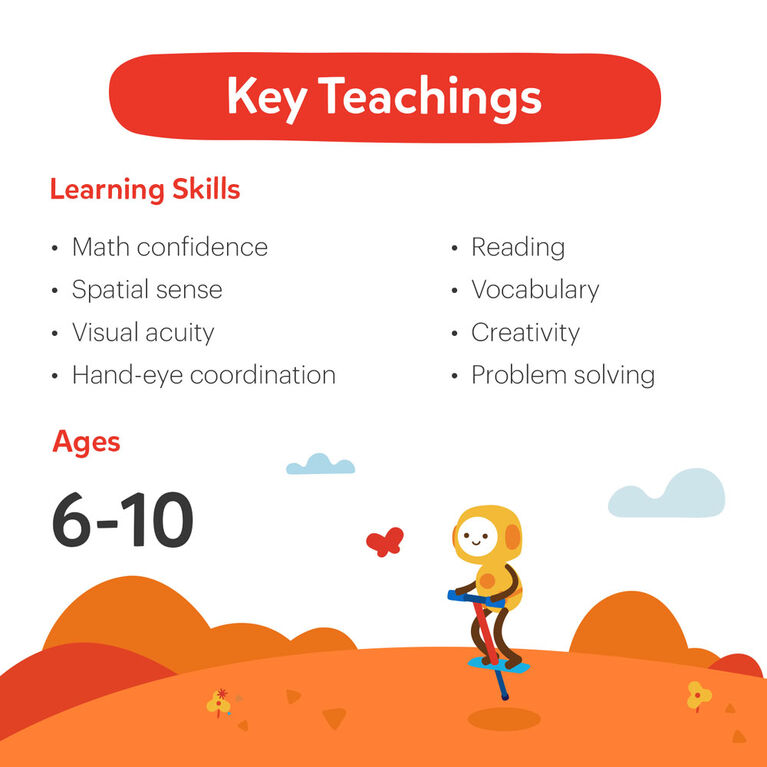 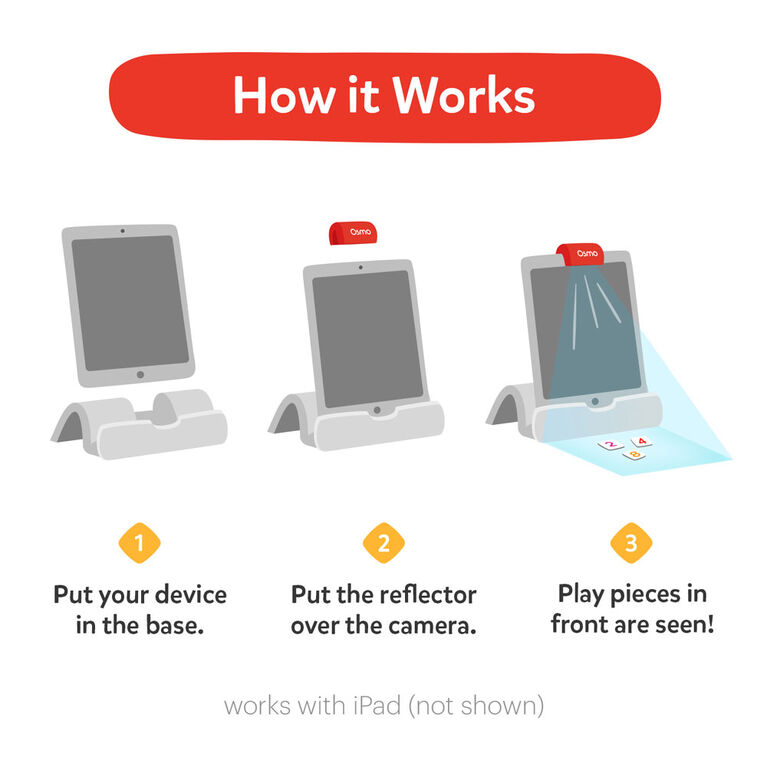 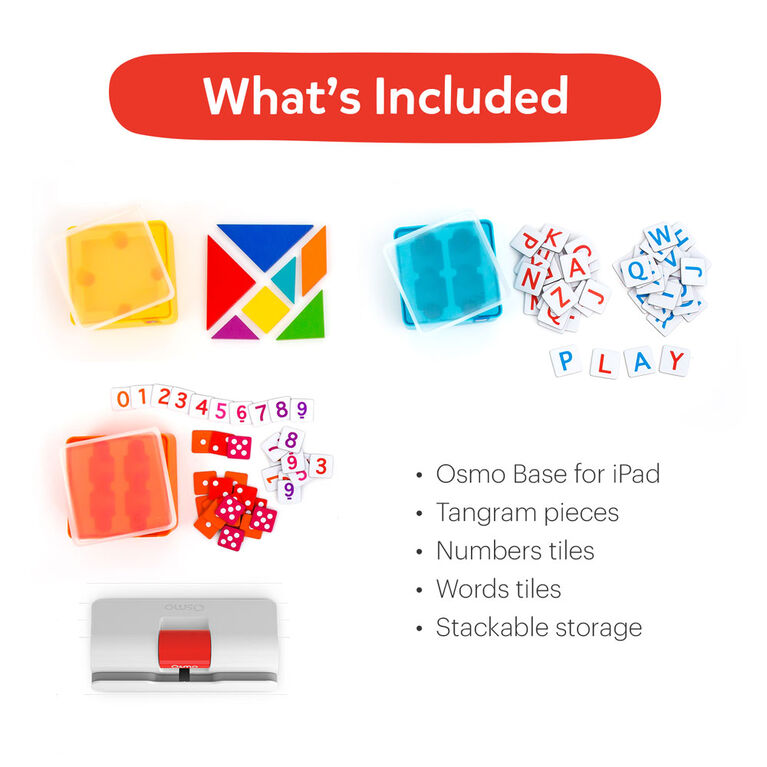 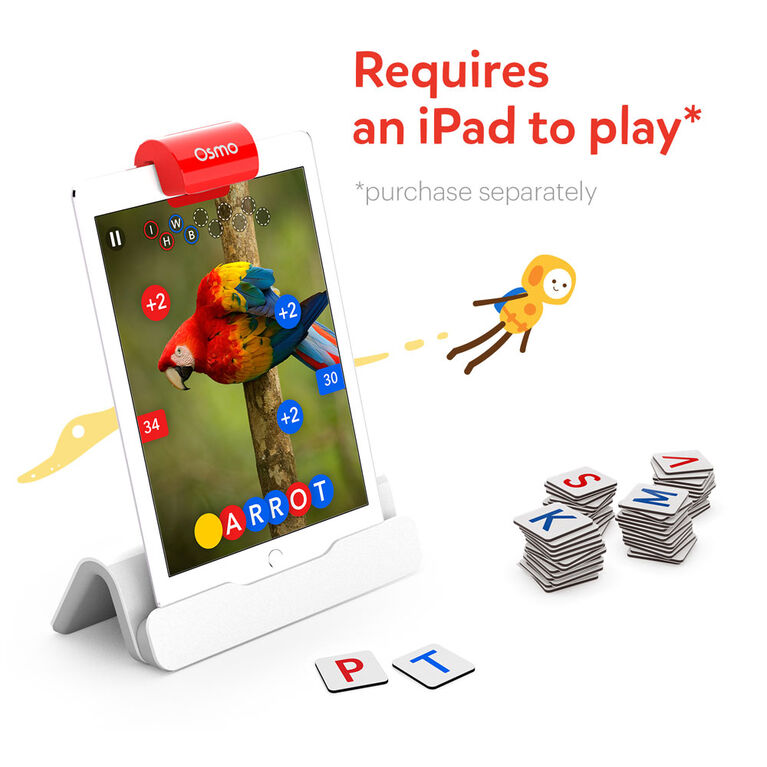 Pinch to zoom
Play beyond the screen
Tangram, Numbers, Words, Masterpiece, and Newton — ﬁve smart games that transform your iPad into a hands-on tool for learning and laughter. Osmo technology "sees" how kids move real-world tangible pieces in front of the screen and responds with on-screen encouragement, guidance, and giggles.
Grow your kid's conﬁdence in math (Numbers) and spelling (Words), as well as visual thinking (Tangram), problem solving (Newton), creative drawing (Masterpiece), and more.
That's why each game centers on a physical activity. Whether it's arranging tangrams, zooming number cards around, or even freehand drawing, Osmo sees and reacts to every real-live move.
What's in the Box
Base and reﬂector
5 learning games: Tangrams, Numbers, Words, Masterpiece, and Newton
Tangram pieces
Words tiles
Numbers tiles
Requires iPad to play
About Osmo
Founded in 2013 by Pramod Sharma and Jerome Scholler, Osmo uses its proprietary Reﬂective Artiﬁcial Intelligence to fuse physical play with digital engagement. In response to kids
hands-on manipulation of real objects — tiles, blocks, drawings, you name it — Osmo provides instant on-screen feedback and fun. This modern, healthy take on digital play promotes creativity, problem-solving, and critical thinking.

Free Shipping when you spend $75. Shop Toys”R”Us, Babies”R”Us and Rise Little Earthling in 1 easy checkout!
Promotion details
Free Shipping when you spend $75. Shop Toys”R”Us, Babies”R”Us and Rise Little Earthling in 1 easy checkout!
Offer applies to selected items for delivery by regular standard shipping only and excludes delivery to some remote locations. Up to the maximum of $20 shipping value. Any shipping expense over this $20 per order maximum amount will be charged to your order. Free Shipping applies only to orders with qualifying merchandise greater than $75 and does not apply to gift cards. Free Shipping offer excludes all large item items, such as; Gym sets, houses, large play sets and bikes, all large furniture items and other select items. Toysrus.ca offers "Free Shipping" on select items throughout the site. The shipment of orders to certain remote locations is excluded from these offers. In these instances, the standard delivery charge will be visible during the checkout process. On some products, special handling fees may still apply. If your order contains items that are ineligible for "Free Shipping", you will be charged for those items. Add item to your shopping cart and proceed to checkout to receive discount. While quantities last. Offer valid only while supplies last and not applicable to canceled orders due to out-of-stock merchandise. Discount not applicable with returned merchandise; total discount will be deducted from the value of any returned item to which the discount applied. This offer is not valid on previous purchases. This promotional offer may be modified or terminated at any time without notice. We reserve the right to cancel any order due to unauthorized, altered, or ineligible use of a discount.
Our recommended Age: 5 - 8 years
ESRB Rating: Everyone
Our recommended Age