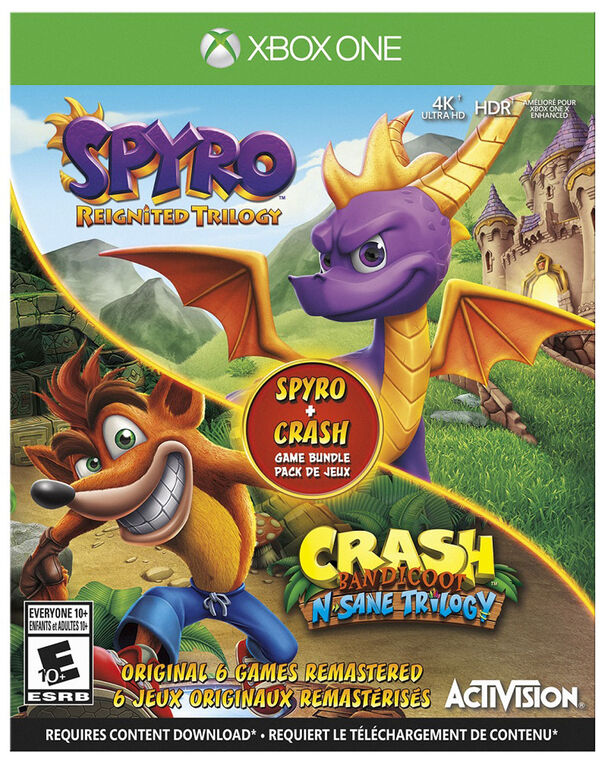 Pinch to zoom
Crash Bandicoot N. Sane Trilogy. Your favorite marsupial, Crash Bandicoot, is back! He's enhanced, entranced & ready-to-dance with the N. Sane Trilogy game collection. Now you can experience Crash Bandicoot like never before in Fur-K. Spin, jump, wump and repeat as you take on the epic challenges and adventures through the three games that started it all, Crash Bandicoot, Crash Bandicoot 2: Cortex Strikes Back and Crash Bandicoot 3: Warped. Relive all your favorite Crash moments in their fully-remastered HD graphical glory and get ready to put some UMPH in your WUMP! Spyro's back and he's all scaled up! The original roast master is back! Same sick burns, same smoldering attitude, now all scaled up in stunning HD. Spyro is bringing the heat like never before in the Spyro Reignited Trilogy game collection. Rekindle the fire with the original three games, Spyro the Dragon, Spyro 2 Ripto's Rage! And Spyro Year of the Dragon. Explore the expansive realms, re-encounter the fiery personalities and relive the adventure in fully remastered glory. Because when there's a realm that needs saving, there's only one dragon to call. Crash Bandicoot Dr. Neo Cortex has a plan to take over the world, and he wants to create genetically engineered animals to do his bidding. Crash Bandicoot 2: Cortex Strikes Back The evil Dr. Neo Cortex is back…out this time to save the world? And he's asking for help from his arch nemesis, Crash Bandicoot? Crash Bandicoot Warped Oh yeah…he's back…AND he's ready! It's a Whole New Time-Traveling Adventure! All new-style gameplay Spyro the Dragon Gnasty Gnorc has returned from exile and has unleashed evil magic on the Dragon Realms, trapping the Dragons in crystal and raising an army of Gnorcs Spyro 2 Ripto's Rage! Spyro has been brought to the land of Avalar to defeat the evil sorcerer Ripto who has brought war to Avalar's Homeworlds.

Free Shipping when you spend $75. Shop Toys”R”Us, Babies”R”Us and Rise Little Earthling in 1 easy checkout!
Promotion details
Free Shipping when you spend $75. Shop Toys”R”Us, Babies”R”Us and Rise Little Earthling in 1 easy checkout!
Offer applies to selected items for delivery by regular standard shipping only and excludes delivery to some remote locations. Up to the maximum of $20 shipping value. Any shipping expense over this $20 per order maximum amount will be charged to your order. Free Shipping applies only to orders with qualifying merchandise greater than $75 and does not apply to gift cards. Free Shipping offer excludes all large item items, such as; Gym sets, houses, large play sets and bikes, all large furniture items and other select items. Toysrus.ca offers "Free Shipping" on select items throughout the site. The shipment of orders to certain remote locations is excluded from these offers. In these instances, the standard delivery charge will be visible during the checkout process. On some products, special handling fees may still apply. If your order contains items that are ineligible for "Free Shipping", you will be charged for those items. Add item to your shopping cart and proceed to checkout to receive discount. While quantities last. Offer valid only while supplies last and not applicable to canceled orders due to out-of-stock merchandise. Discount not applicable with returned merchandise; total discount will be deducted from the value of any returned item to which the discount applied. This offer is not valid on previous purchases. This promotional offer may be modified or terminated at any time without notice. We reserve the right to cancel any order due to unauthorized, altered, or ineligible use of a discount.
Our recommended Age: 10 - 25 years
ESRB Rating: Everyone
Our recommended Age