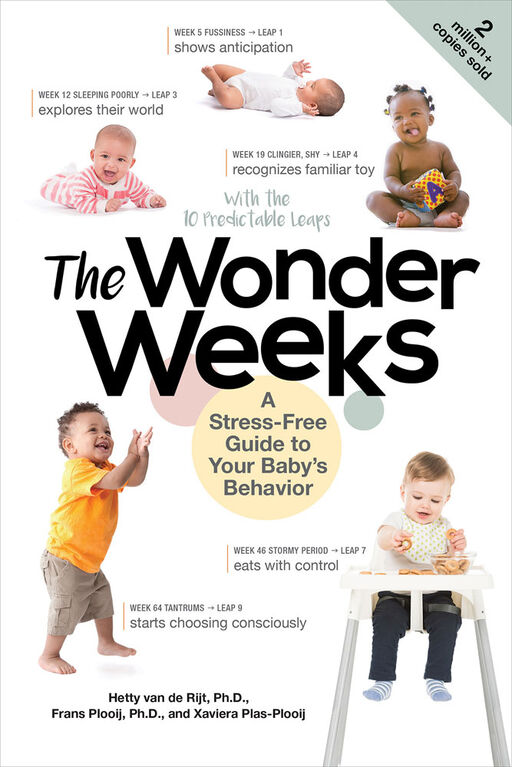 Pinch to zoom
Everything a new parent needs to know about their babyand#x2019;s 10 magical and#x201c;leapsand#x201d;and#x2014;and when to expect themand#x2014;in a new, modern sixth edition of The Wonder Weeksand#xa;

The Wonder Weeks answers the question, and#x201c;Why is my baby cranky, clingy, and crying?and#x201d; with helpful guidance. Maybe theyand#x2019;re experiencing a leap in brain development, after which new skills are mastered, discoveries are made, and perceptions evolve. Fussy behavior might signal that great progress is underway!and#xa;Better yet, these phases occur on similar schedules for most babiesand#x2014;as explained and mapped out in this bookand#x2014;so parents can anticipate the and#x201c;stormy weeksand#x201d; that precede the and#x201c;sunny weeks.and#x201d; Based on decades of research, this fully revised sixth edition covers the first 20 months of a babyand#x2019;s life and includes:and#xa;and#xa;
-The top 10 things to know and remember about a leapand#xa;
-Fun games to support brain developmentand#xa;
-Fill-in-the-blank checklists to help better understand personality and behavior traitsand#xa;
-Science-based explanations about sleepand#xa;
-Fresh insight and recent commentary from new parents whoand#x2019;ve used The Wonder Weeksand#xa;
-Anchor moments to keep new parents sane, especially when they are exhausted and discouragedand#xa;and#xa;With 2 million+ books sold, and 4 million+ downloads of the corresponding app, The Wonder Weeks has struck a chord. Join the phenomenon that has been embraced by celebrities, social media influencers, and parents worldwide.and#xa;

Free Shipping when you spend $99. Shop Toys”R”Us, Babies”R”Us and Rise Little Earthling in 1 easy checkout!
Promotion details
Free Shipping when you spend $99. Shop Toys”R”Us, Babies”R”Us and Rise Little Earthling in 1 easy checkout!
Offer applies to selected items for delivery by regular standard shipping only and excludes delivery to some remote locations. Up to the maximum of $20 shipping value. Any shipping expense over this $20 per order maximum amount will be charged to your order. Free Shipping applies only to orders with qualifying merchandise greater than $99 and does not apply to gift cards. Free Shipping offer excludes all large SHIP ALONE items, such as; Strollers, Car Seats, Gym sets, houses, large play sets and bikes, all large furniture items and other select items. Toysrus.ca offers "Free Shipping" on select items throughout the site. The shipment of orders to certain remote locations is excluded from these offers. In these instances, the standard delivery charge will be visible during the checkout process. On some products, special handling fees may still apply. If your order contains items that are ineligible for "Free Shipping", you will be charged for those items. Add item to your shopping cart and proceed to checkout to receive discount. While quantities last. Offer valid only while supplies last and not applicable to canceled orders due to out-of-stock merchandise. Discount not applicable with returned merchandise; total discount will be deducted from the value of any returned item to which the discount applied. This offer is not valid on previous purchases. This promotional offer may be modified or terminated at any time without notice. We reserve the right to cancel any order due to unauthorized, altered, or ineligible use of a discount.
Our recommended Age: 6 - 12 months
Our recommended Age