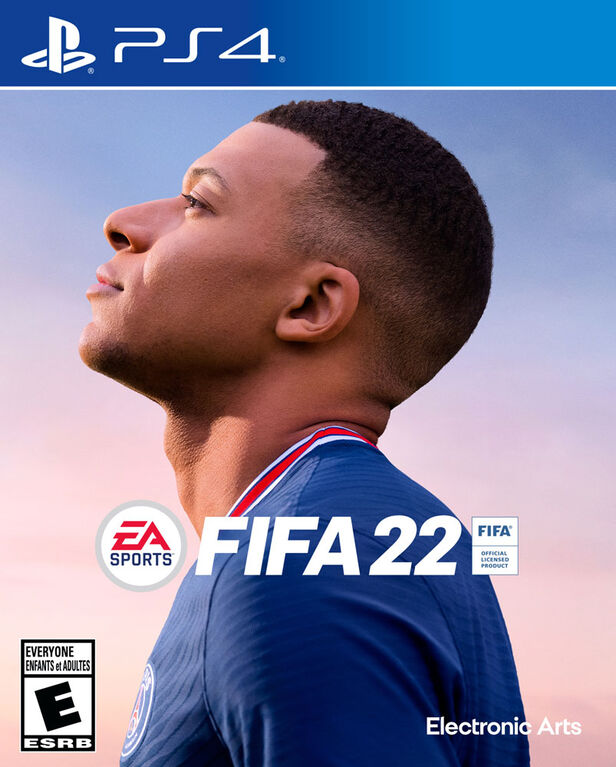 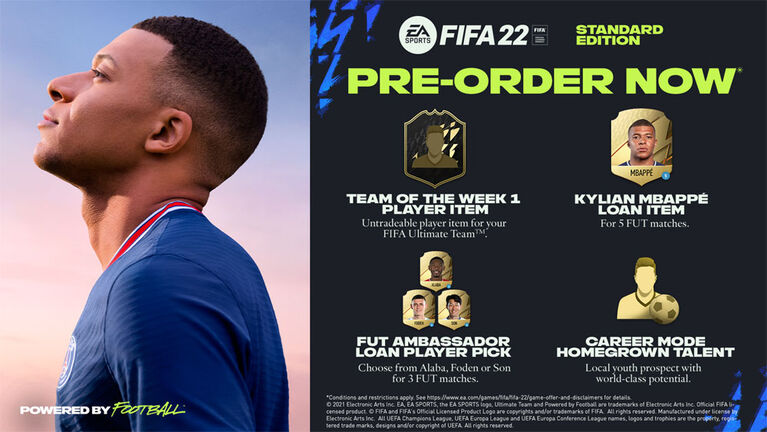 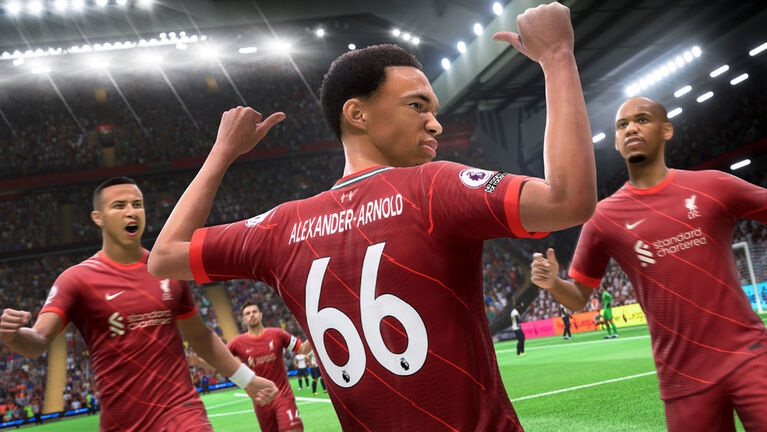 Pinch to zoom
Powered by Football, EA Sports FIFA 22 brings the game even closer to the real thing with fundamental gameplay advances and a new season of innovation across every mode. New gameplay features in FIFA 22 give you more consistency between the posts with a goalkeeper rewrite that brings more composure to the most important position on the pitch, alongside new ball physics, explosive sprint that better matches the acceleration of the game's quickest players, and new attacking tactics that let you take control of how your team plays. In Career Mode, live out your football dreams as you create and manage the game's newest club to glory. Volta Football rewards you for your flair with restyled small-sided gameplay and new ways to play and progress each season. Get the squad together in Pro Clubs with enhanced team customization and updated progression that puts you in control of your Virtual Pro's development, and welcome back some of football's most memorable players as new FUT Heroes in FIFA Ultimate Team with a redefined competition structure that makes testing your skills against other players more accessible. However, you play, enjoy unrivaled authenticity everywhere with over 17,000 players, 700+ teams, and more than 30 leagues including the UEFA Champions League, Conmebol Libertadores, and the brand new UEFA Europa Conference League - only available in FIFA 22.

Reimagined gameplay creates fundamental advances that you'll feel across every mode in FIFA 22. A goalkeeper rewrite brings more composure and consistency to the most important position on the pitch, new ball physics reimagine every pass, shot, and goal, and explosive sprint lets you feel the acceleration of the game's quickest players.

Goalkeeper Rewrite - A brand new goalkeeper system brings a new level of intelligence to the last line of defence, unlocking more reliable shot-stopping and smarter decision-making between the posts. In FIFA 22, goalkeeper positioning personality replicates the different styles of keepers throughout the game - to represent the lightning-fast reflexes of world-class shot stoppers.

Explosive Sprint - A new gameplay mechanic that changes the dynamic of one-on-one situations, Explosive Sprint gives you more control over acceleration when dribbling or defending. Lure opponents in and choose when to unleash your full speed to get away from the defender as you drive your team forward in attack.

New Attacking Tactics - New Attacking Tactics give you more control over how you want your team to play. Set up your team with different styles in each half of the pitch: keep the ball in your half and explode into attack with fast build up in the opponent's, play direct from box to box, or line up in your own unique style.

Free Shipping when you spend $99. Shop Toys”R”Us, Babies”R”Us and Rise Little Earthling in 1 easy checkout!
Promotion details
Free Shipping when you spend $99. Shop Toys”R”Us, Babies”R”Us and Rise Little Earthling in 1 easy checkout!
Offer applies to selected items for delivery by regular standard shipping only and excludes delivery to some remote locations. Up to the maximum of $20 shipping value. Any shipping expense over this $20 per order maximum amount will be charged to your order. Free Shipping applies only to orders with qualifying merchandise greater than $99 and does not apply to gift cards. Free Shipping offer excludes all large SHIP ALONE items, such as; Strollers, Car Seats, Gym sets, houses, large play sets and bikes, all large furniture items and other select items. Toysrus.ca offers "Free Shipping" on select items throughout the site. The shipment of orders to certain remote locations is excluded from these offers. In these instances, the standard delivery charge will be visible during the checkout process. On some products, special handling fees may still apply. If your order contains items that are ineligible for "Free Shipping", you will be charged for those items. Add item to your shopping cart and proceed to checkout to receive discount. While quantities last. Offer valid only while supplies last and not applicable to canceled orders due to out-of-stock merchandise. Discount not applicable with returned merchandise; total discount will be deducted from the value of any returned item to which the discount applied. This offer is not valid on previous purchases. This promotional offer may be modified or terminated at any time without notice. We reserve the right to cancel any order due to unauthorized, altered, or ineligible use of a discount.
Our recommended Age: 9 - 16 years
ESRB Rating: Everyone
Our recommended Age