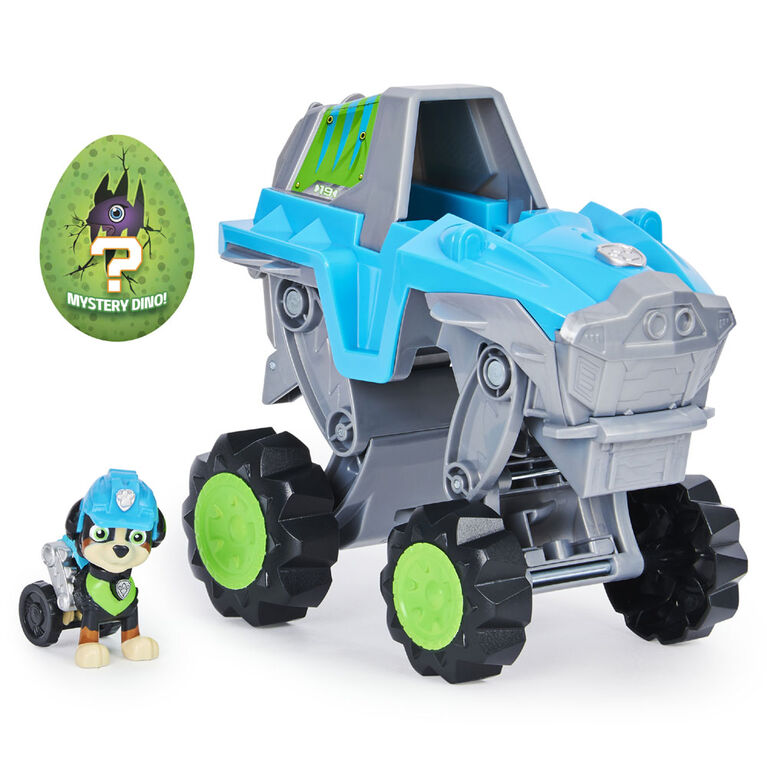 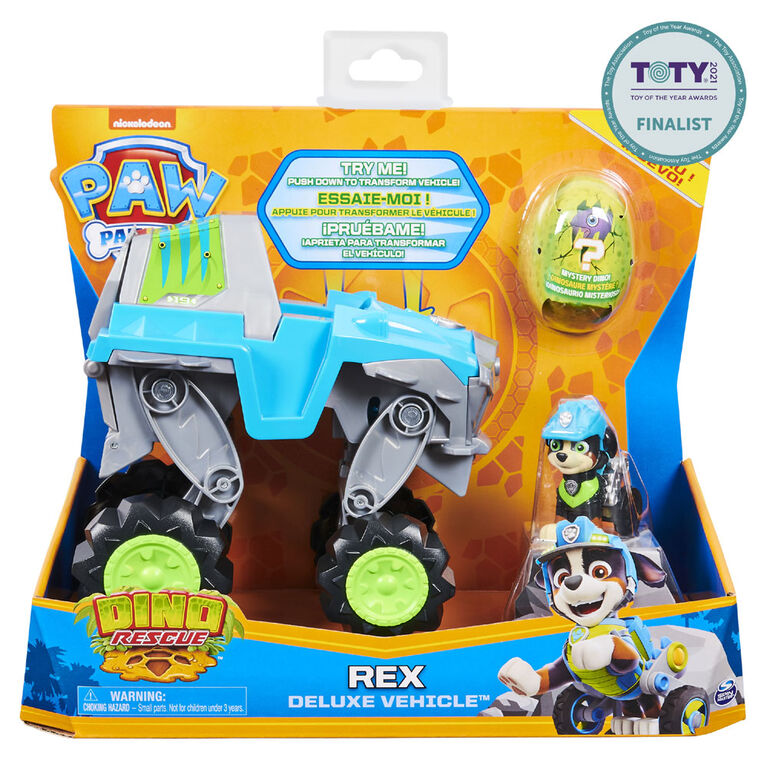 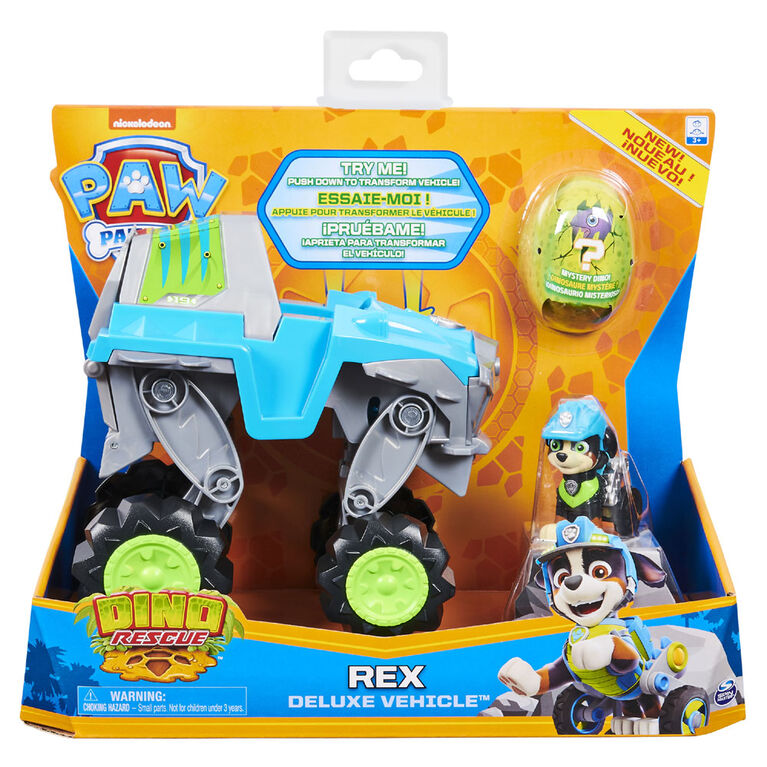 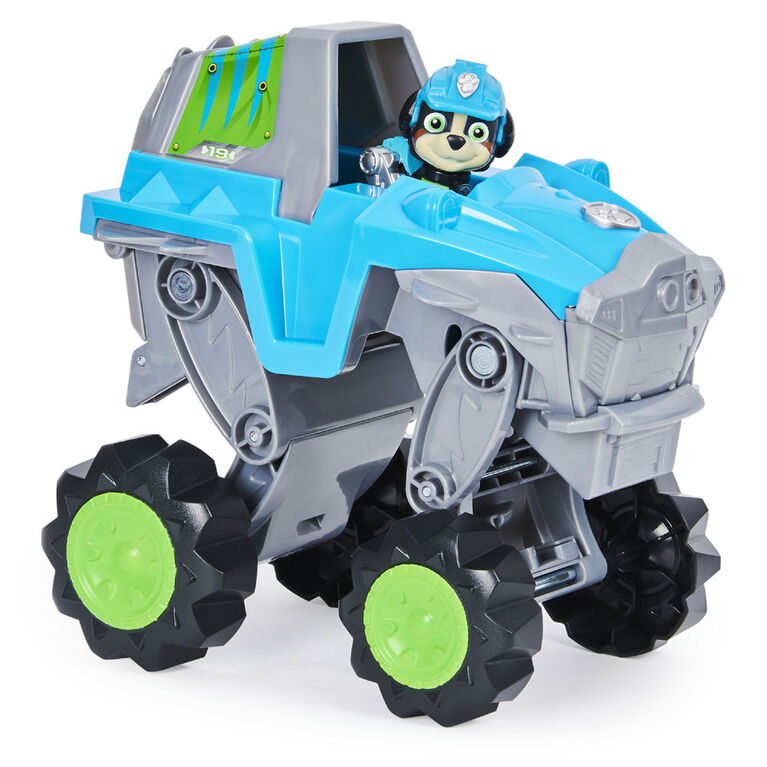 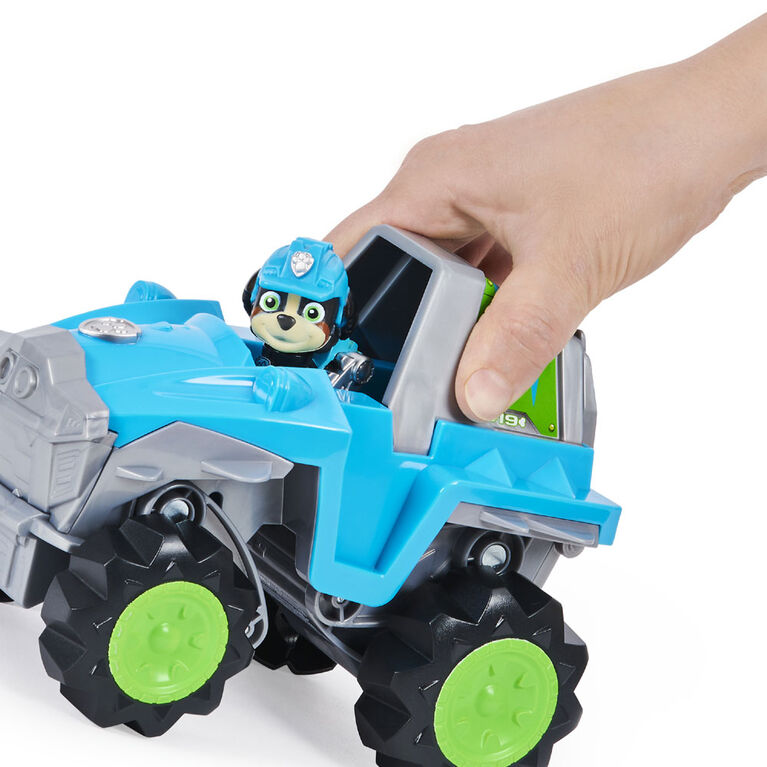 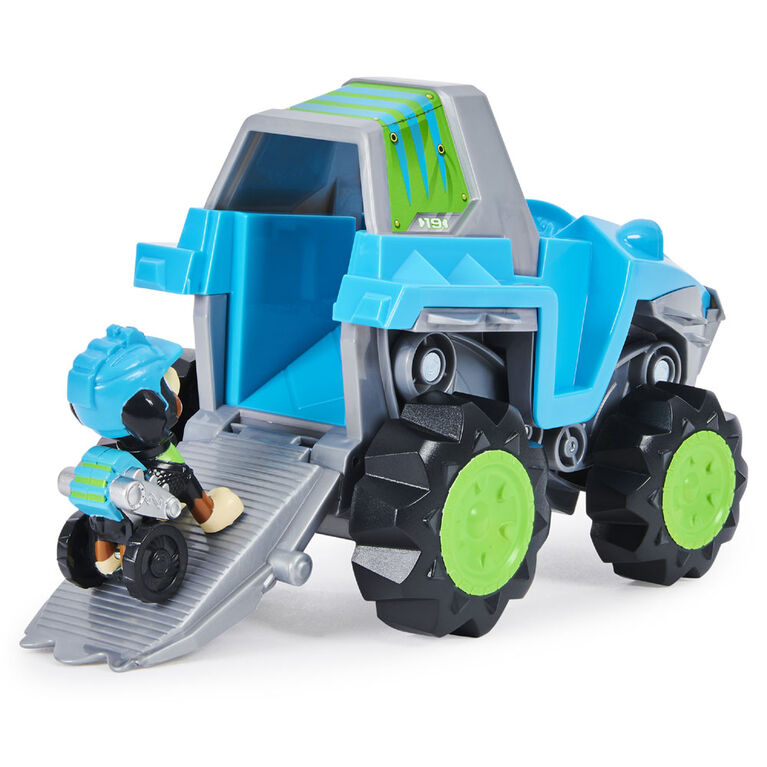 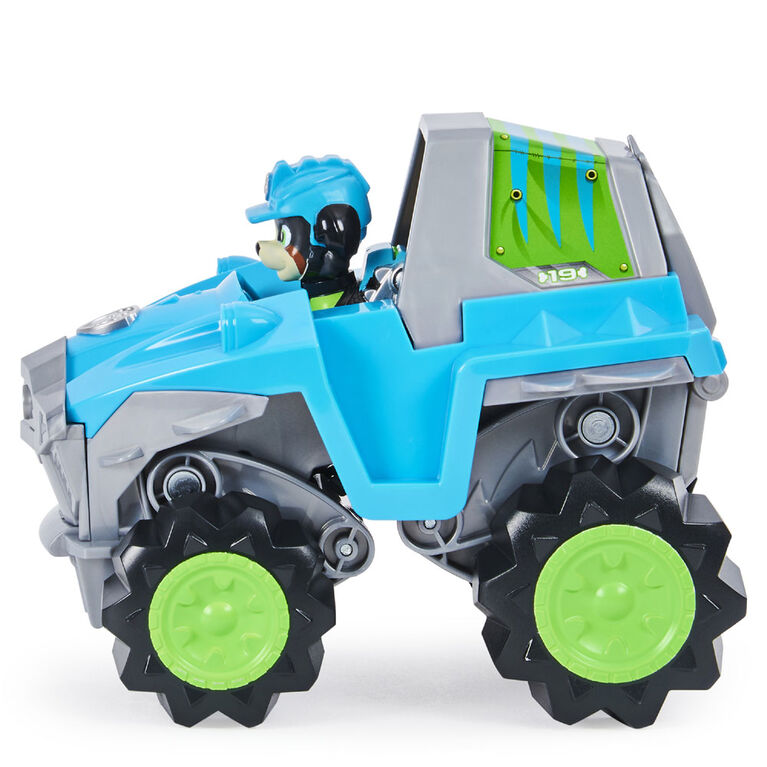 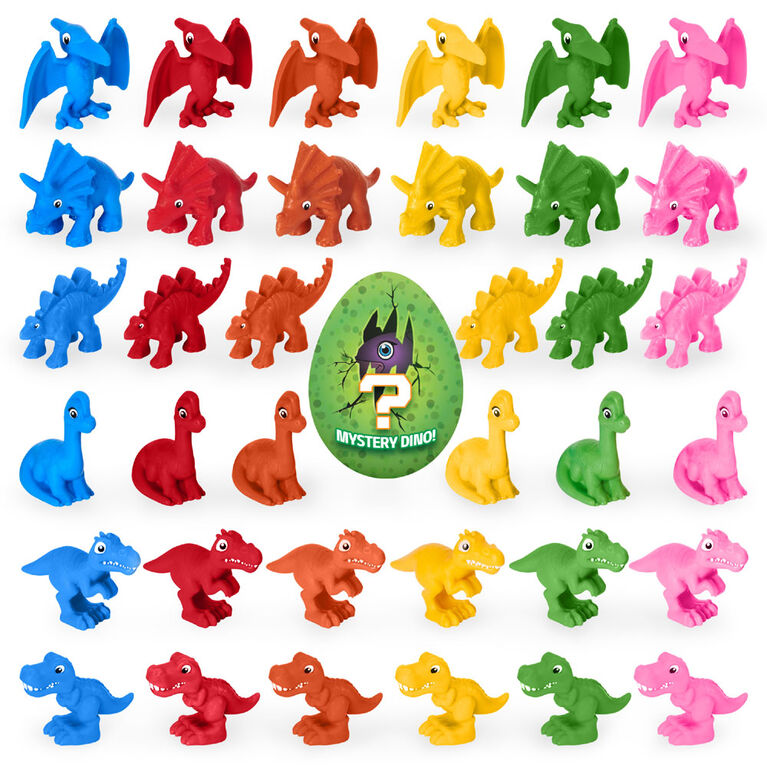 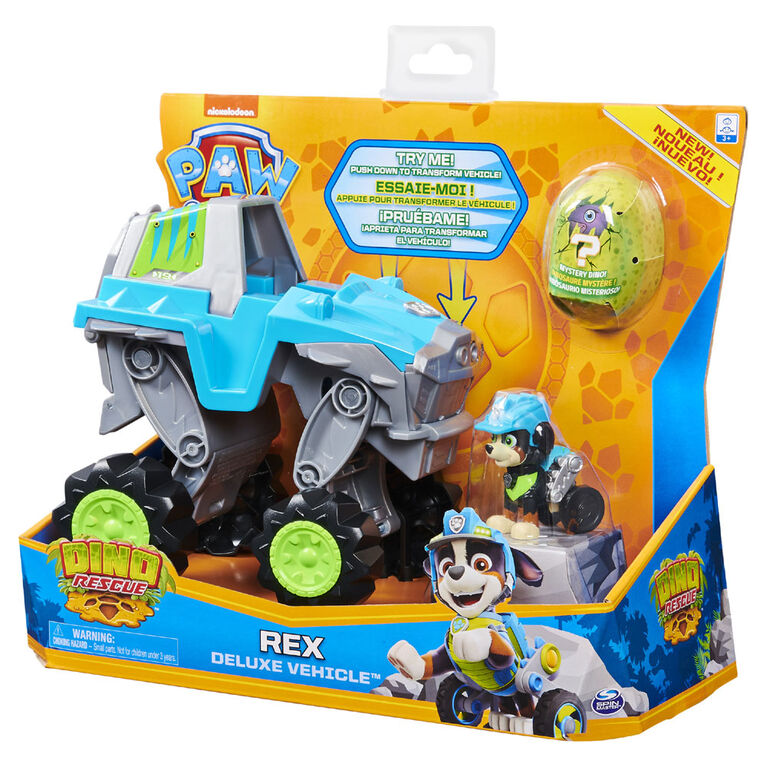 Pinch to zoom
R Exclusive, only available at Toys R Us Canada. Join PAW Patrol's newest pup, Rex, on exciting rescues with his Dino Rescue Deluxe Vehicle! This unique vehicle for PAW Patrol's dinosaur whisperer comes with a Rex collectible figure and a mystery dino figure! Featuring dinosaur-inspired details, a ramp and a transformation feature, Rex's custom deluxe vehicle is ready to roll into action. Unbox the mystery figure from the packaging to discover a colorful dinosaur to use in all of your rescue adventures! When a dino friend is in trouble, roll Rex up the ramp and push down on his vehicle to activate its awesome transformation. The vehicle's body pops up from ground level to dino height, so Rex can interact with even the tallest dinosaurs! Explore your imagination to create awesome prehistoric rescues, just like the ones from the hit TV show. For more dino-sized fun, collect all of the PAW Patrol Dino Rescue Deluxe Vehicles (each sold separately) and load one into the PAW Dino Patroller team vehicle (sold separately)! Be ready for any mission with Rex and his Dino Rescue Deluxe Vehicle!
Rex's dinosaur-inspired vehicle is ready for awesome rescues! Push down to make the vehicle transform and pop-up from ground to dino height, so Rex can help the tallest dinosaurs!

Free Shipping when you spend $99. Shop Toys”R”Us, Babies”R”Us and Rise Little Earthling in 1 easy checkout!
Promotion details
Free Shipping when you spend $99. Shop Toys”R”Us, Babies”R”Us and Rise Little Earthling in 1 easy checkout!
Offer applies to selected items for delivery by regular standard shipping only and excludes delivery to some remote locations. Up to the maximum of $20 shipping value. Any shipping expense over this $20 per order maximum amount will be charged to your order. Free Shipping applies only to orders with qualifying merchandise greater than $99 and does not apply to gift cards. Free Shipping offer excludes all large SHIP ALONE items, such as; Strollers, Car Seats, Gym sets, houses, large play sets and bikes, all large furniture items and other select items. Toysrus.ca offers "Free Shipping" on select items throughout the site. The shipment of orders to certain remote locations is excluded from these offers. In these instances, the standard delivery charge will be visible during the checkout process. On some products, special handling fees may still apply. If your order contains items that are ineligible for "Free Shipping", you will be charged for those items. Add item to your shopping cart and proceed to checkout to receive discount. While quantities last. Offer valid only while supplies last and not applicable to canceled orders due to out-of-stock merchandise. Discount not applicable with returned merchandise; total discount will be deducted from the value of any returned item to which the discount applied. This offer is not valid on previous purchases. This promotional offer may be modified or terminated at any time without notice. We reserve the right to cancel any order due to unauthorized, altered, or ineligible use of a discount.
Our recommended Age: 3 - 7 years
Our recommended Age