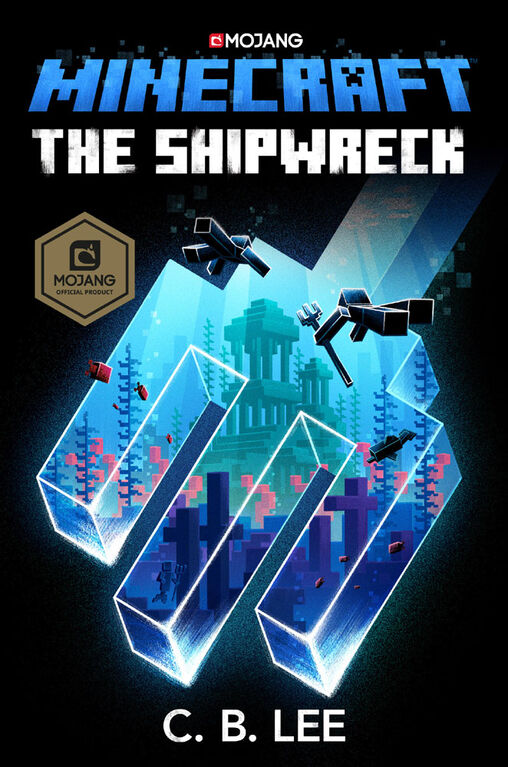 Pinch to zoom
Unravel the mysteries of an extraordinary underwater world in this official Minecraft novel! When three kids discover a mystery in an abandoned Minecraft server, they must race against the clock to uncover its secrets.

Jake Thomas is always the new kid. His family moves so much for his dad's work that it's easier to keep his head down and not get attached to anyone. He'll be gone in a few months anyway. But when they end up in Los Angeles, Dad promises this will be the last time they move. The Pacific Crest Apartments are home now... which means it's time for Jake to finally make friends.

Jake isn't sure he should count the two kids he meets at the apartment's community center as friends, though. Tank Vuong is a large and intimidating boy who hangs with a tough crowd, and Emily Quesada is a fashionista who's quick with a sarcastic remark. But when he discovers an old computer lab in a forgotten corner of the community center, with a strange Minecraft server containing cryptic riddles, he realizes he's going to need help cracking the code-because at the end of the summer, the community center will be demolished, and all hope of solving the mystery will go with it. Following the hints left by an enigmatic figure known as The Wizard, the trio journeysinto the dangerous depths of the ocean, where uncanny creatures lurk and untold treasure awaits....

Free Shipping when you spend $75. Shop Toys”R”Us and Babies”R”Us in 1 easy checkout!
Promotion details
Free Shipping when you spend $75. Shop Toys”R”Us and Babies”R”Us in 1 easy checkout!
Offer applies to selected items for delivery by regular standard shipping only and excludes delivery to some remote locations. Up to the maximum of $20 shipping value. Any shipping expense over this $20 per order maximum amount will be charged to your order. Free Shipping applies only to orders with qualifying merchandise greater than $75 and does not apply to gift cards. Free Shipping offer excludes all large SHIP ALONE items, such as; Strollers, Car Seats, Gym sets, houses, large play sets and bikes, all large furniture items and other select items. Toysrus.ca offers "Free Shipping" on select items throughout the site. The shipment of orders to certain remote locations is excluded from these offers. In these instances, the standard delivery charge will be visible during the checkout process. On some products, special handling fees may still apply. If your order contains items that are ineligible for "Free Shipping", you will be charged for those items. Add item to your shopping cart and proceed to checkout to receive discount. While quantities last. Offer valid only while supplies last and not applicable to canceled orders due to out-of-stock merchandise. Discount not applicable with returned merchandise; total discount will be deducted from the value of any returned item to which the discount applied. This offer is not valid on previous purchases. This promotional offer may be modified or terminated at any time without notice. We reserve the right to cancel any order due to unauthorized, altered, or ineligible use of a discount.
Our recommended Age: 10 - 15 years
Our recommended Age