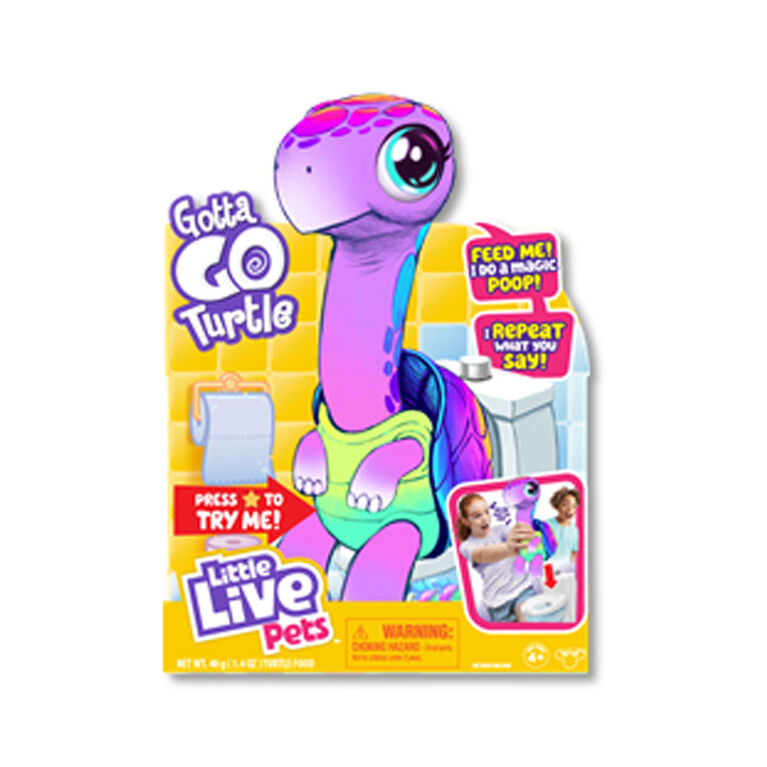 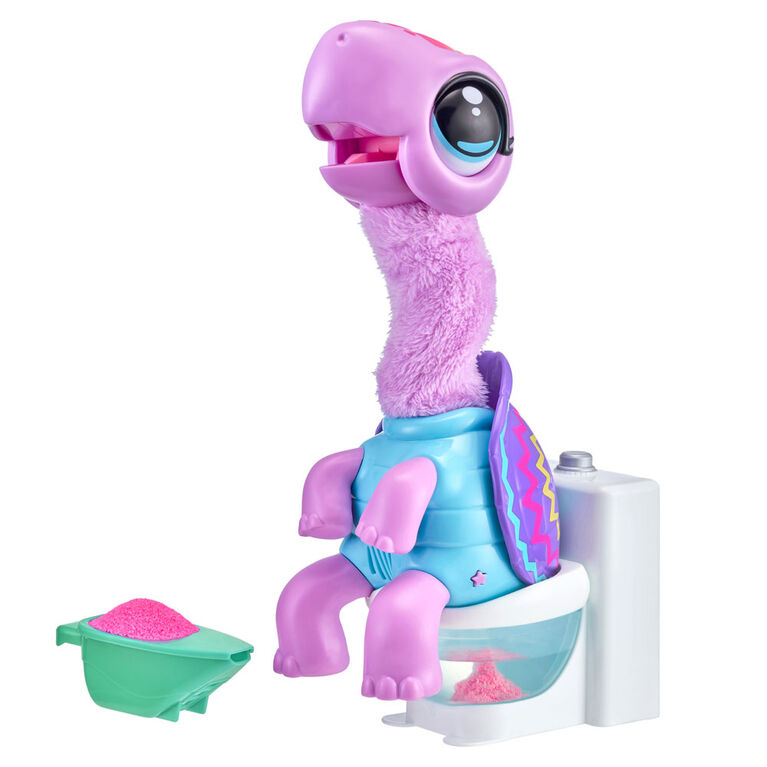 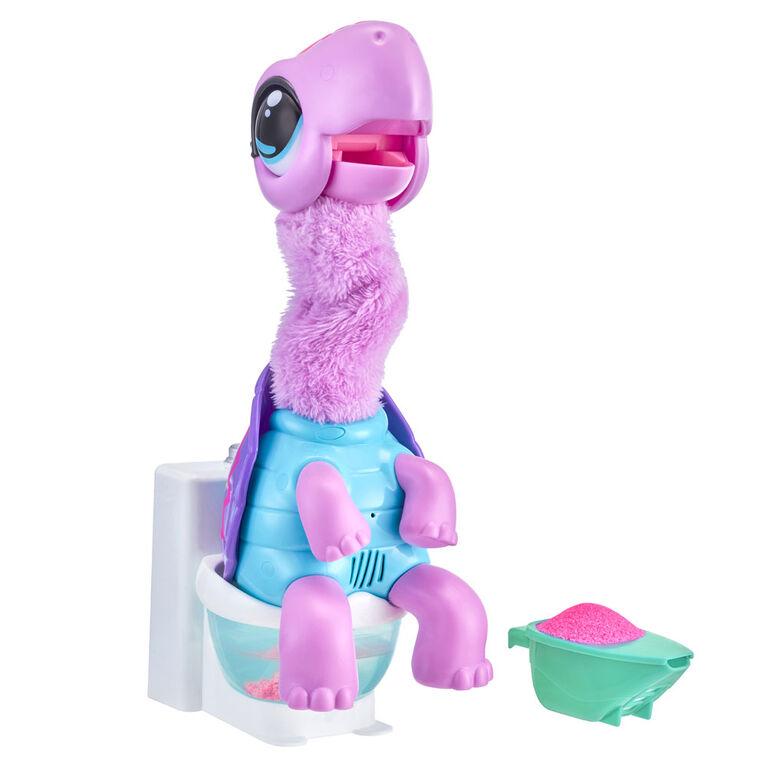 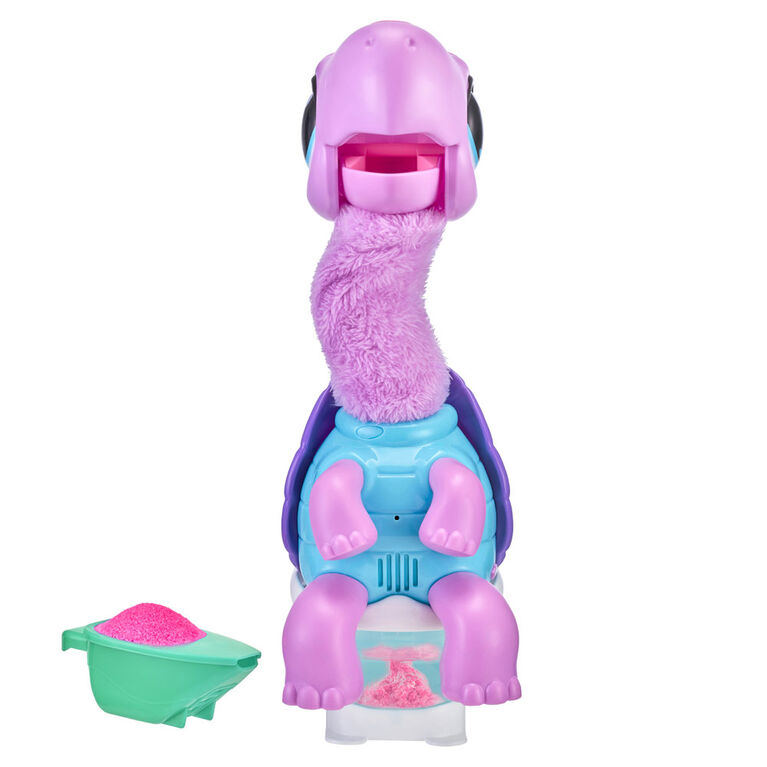 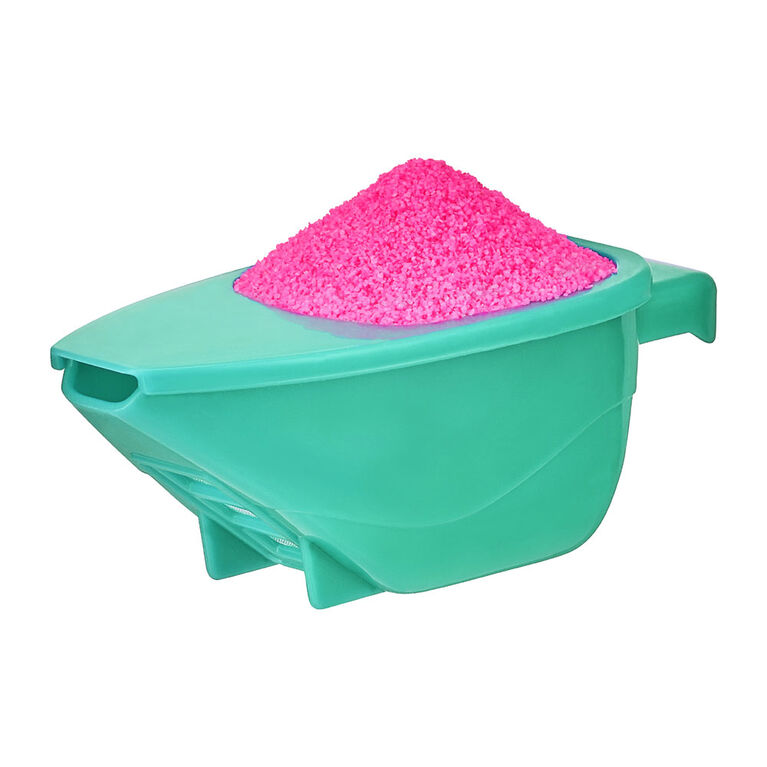 Shelbert is an interactive, toilet-trained turtle who loves to sing, dance, chat back, eat, and poop - on the toilet! Feed Shelbert his turdle food and watch his neck wiggle as he gobbles it all down. When Shelbert's gotta go, he'll let you know by singing his catchy song! Quickly place him on the toilet and watch him poop into the bowl!

Perfect for repeat play - once Shelbert's done, you can ‘do-do' it all over again! Simply scoop up the poop and watch as it magically dries back into Turdle Food! Shelbert also loves to speak - simply record what you want to say and he'll repeat it back to you! With his beautiful rainbow shell, hilariously funny movement, sounds and reactions, Shelbert the Gotta Go Turdle will have everyone singing the song and giggling for ages!

Shelbert comes with a toilet, a scoop, packet of reusable Turtle food, an instruction booklet, and batteries are included for immediate play.

- FUNNY NEW BEST FRIEND: Shelbert is an interactive, toilet-trained turtle who loves to sing, dance, chat back, eat, and poop - on the toilet!

- HILARIOUS TOILET SONG: Feed Shelbert his Turdle Food then listen as he chews and watch as his long neck wiggles. When he sings "Uh Oh! Gotta Go!", you'll know it's time to place him on the toilet and watch as he poops!

When Shelbert has finished pooping, pour out the contents of the toilet into the included scoop to separate the water from the poop! His magic poop instantly dries and becomes Turdle Food again! Now you can feed Shelbert and play with him again and again!

- REPEATS WHAT YOU SAY: Shelbert loves to chat and will automatically repeat what you say. To listen to the last recording again, simply press the purple star button beneath his shell.

- THE PERFECT GIFT: This toy is designed to bring hours of great fun and laughter for kids ages 4+

Free Shipping when you spend $75. Shop Toys”R”Us, Babies”R”Us and Rise Little Earthling in 1 easy checkout!
Promotion details
Free Shipping when you spend $75. Shop Toys”R”Us, Babies”R”Us and Rise Little Earthling in 1 easy checkout!
Offer applies to selected items for delivery by regular standard shipping only and excludes delivery to some remote locations. Up to the maximum of $20 shipping value. Any shipping expense over this $20 per order maximum amount will be charged to your order. Free Shipping applies only to orders with qualifying merchandise greater than $75 and does not apply to gift cards. Free Shipping offer excludes all large item items, such as; Gym sets, houses, large play sets and bikes, all large furniture items and other select items. Toysrus.ca offers "Free Shipping" on select items throughout the site. The shipment of orders to certain remote locations is excluded from these offers. In these instances, the standard delivery charge will be visible during the checkout process. On some products, special handling fees may still apply. If your order contains items that are ineligible for "Free Shipping", you will be charged for those items. Add item to your shopping cart and proceed to checkout to receive discount. While quantities last. Offer valid only while supplies last and not applicable to canceled orders due to out-of-stock merchandise. Discount not applicable with returned merchandise; total discount will be deducted from the value of any returned item to which the discount applied. This offer is not valid on previous purchases. This promotional offer may be modified or terminated at any time without notice. We reserve the right to cancel any order due to unauthorized, altered, or ineligible use of a discount.
Our recommended Age: 5 - 10 years
Our recommended Age