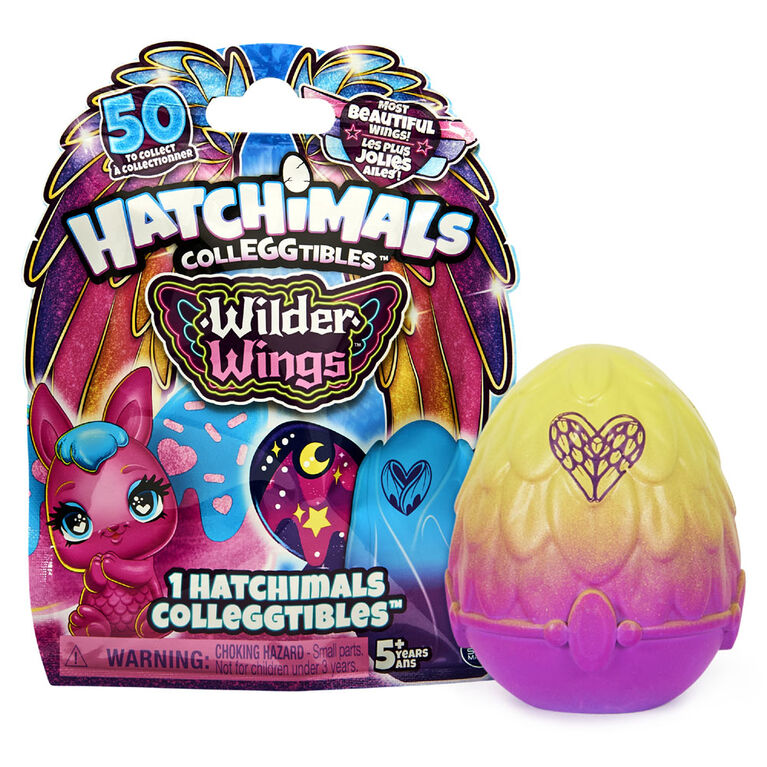 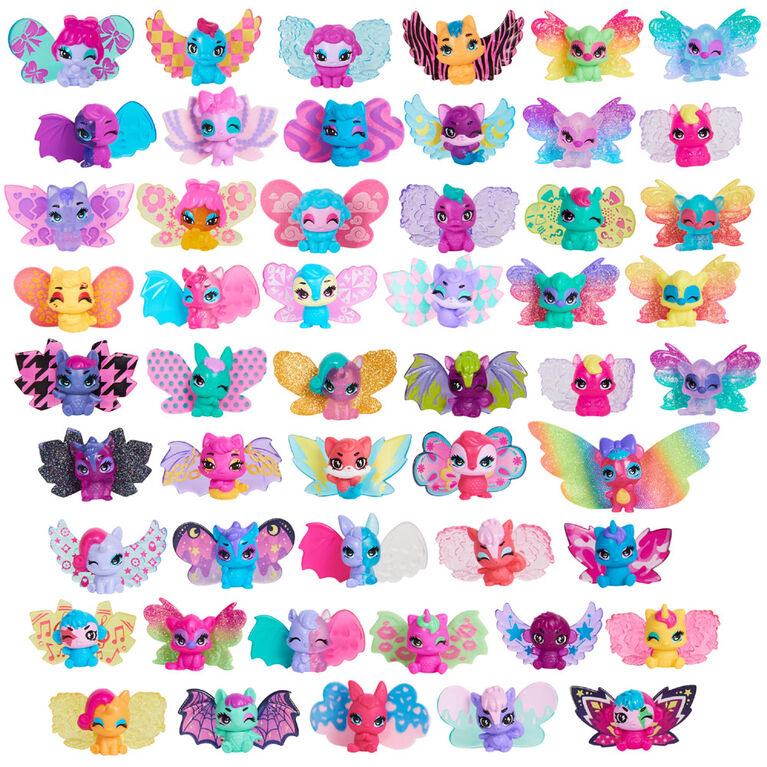 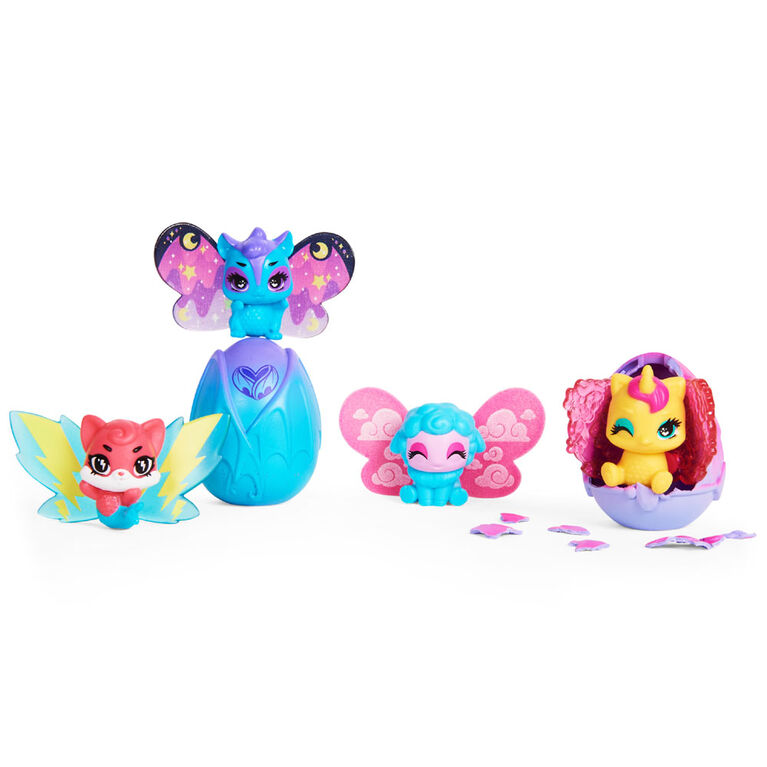 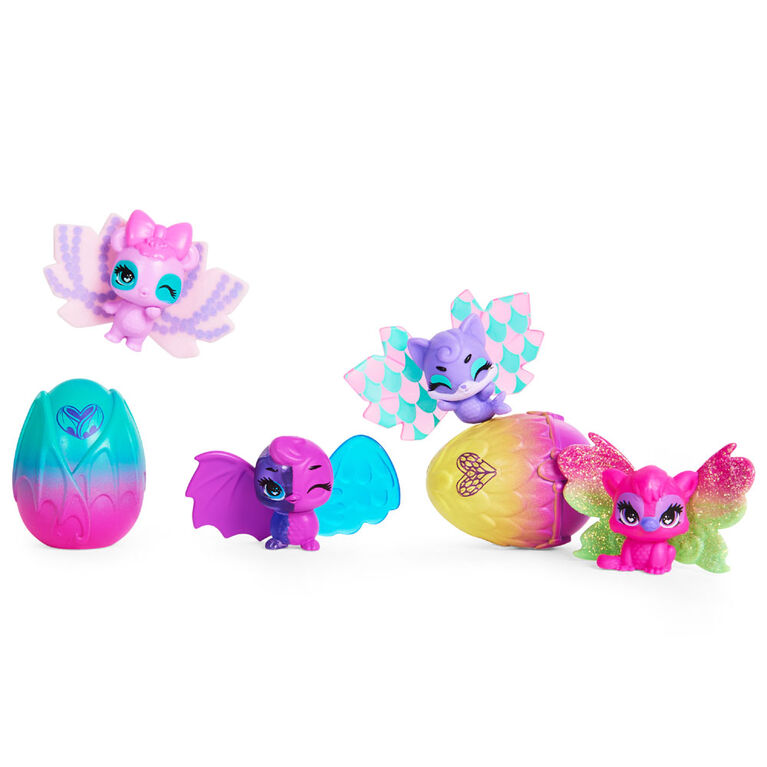 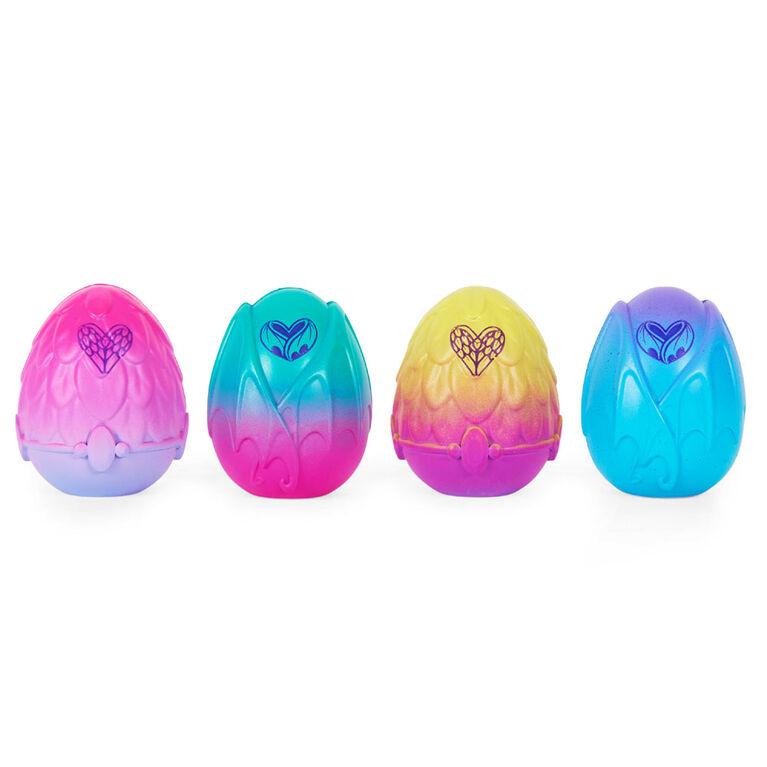 Pinch to zoom
Hatch the wildest bunch of Hatchimals CollEGGtibles yet! A glitter storm swirled through Hatchtopia, transforming the Hatchimals and Pixies wings into Wilder Wings! These adorable Hatchimals characters feature the most beautiful large wings that all mix and match! There are over 10 styles of Wilder Wings, including angel, flower, bat, cloud, split wings and more! Plus, there’s even more surprises to discover: a wild new hatch and nine different wing features like gummy, sugar glitter, printed and more! Each new egg has a wing-inspired design and the Wilder Wings can be found on the outside of the egg. Crack the front of the egg to reveal your wild new friend! Then, easily attach their wings! Hatch Draggle with fuzzy bat wings; Unikeet with gummy flower wings; Tigrette with shimmery arrow wings; Penguala with split bat and angel wings, and so many more characters! Will you find the 1 in 100 super chase Pandor with rainbow fabric wings? Mix and match wings on all of your Wilder Wings Hatchimals to create fun new combinations! With 50 Wilder Wings Hatchimals and six Wilder Wings Pixies to collect, add them all to your collection (each sold separately)! On your checklist, you’ll also get a Hatchtopia Life code to use in the free app (compatible with iOS and Android devices). Go wild with Hatchimals CollEGGtibles Wilder Wings and hatch the wildest wings ever!

Hatchimals CollEGGtibles, Wilder Wings 1-Pack with Mix and Match Wings (Styles May Vary) is rated 4.7 out of 5 by 18.
Website Price: $3.99

Free Shipping when you spend $75. Shop Toys”R”Us, Babies”R”Us and Rise Little Earthling in 1 easy checkout!
Promotion details
Free Shipping when you spend $75. Shop Toys”R”Us, Babies”R”Us and Rise Little Earthling in 1 easy checkout!
Offer applies to selected items for delivery by regular standard shipping only and excludes delivery to some remote locations. Up to the maximum of $20 shipping value. Any shipping expense over this $20 per order maximum amount will be charged to your order. Free Shipping applies only to orders with qualifying merchandise greater than $75 and does not apply to gift cards. Free Shipping offer excludes all large item items, such as; Gym sets, houses, large play sets and bikes, all large furniture items and other select items. Toysrus.ca offers "Free Shipping" on select items throughout the site. The shipment of orders to certain remote locations is excluded from these offers. In these instances, the standard delivery charge will be visible during the checkout process. On some products, special handling fees may still apply. If your order contains items that are ineligible for "Free Shipping", you will be charged for those items. Add item to your shopping cart and proceed to checkout to receive discount. While quantities last. Offer valid only while supplies last and not applicable to canceled orders due to out-of-stock merchandise. Discount not applicable with returned merchandise; total discount will be deducted from the value of any returned item to which the discount applied. This offer is not valid on previous purchases. This promotional offer may be modified or terminated at any time without notice. We reserve the right to cancel any order due to unauthorized, altered, or ineligible use of a discount.
Our recommended Age: 7 - 9 years
Our recommended Age